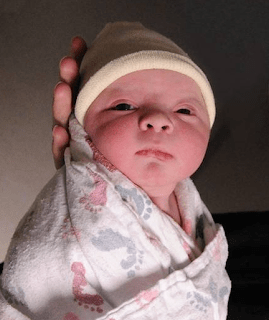 The announcement read: “Baby and parents are doing well, baby has learned to cry already. No gifts please, just nice thoughts for Caspian, humankind, the planet, and the universe.”
Caspian Julius was born on September 30, 2011. I don’t know if he was produced by artificial insemination or adoption. Nor does the public. What we do know is he made headlines because he is the son of the first openly gay member of Congress to become a parent, Jared Polis (D-Co), and his life partner Marlon Reis.
In the baby’s photo, he looks earnest, with eyes wide open. Caspian wears a knit newborn cap and is swathed in an animal-printed blanket, typical accoutrements of infants. He looks innocent, but will probably be judged by those who deem his family of two “daddies” unconstitutional and blasphemous – an assault on “family values.” By his very existence in this modern family, he will become, if he hasn’t already, a poster boy for the religious right who regard marriage as solely a union between man and woman. Caspian, without lifting a finger, has become a symbol of controversy.
He is not alone. According to The Family Equality Council, an organization that advocates for LGBT families, there are one million LGBT parents raising two million children. Yet, Caspian will know that having two dads is different. Although studies have shown that children of committed same-sex couples fare just as well, if not better, than heterosexual couples, it will take more than his snowy village to raise Caspian. His well-meaning parents will have to fight for his acceptance in mainstream society, from day one.
Is it smart for same-sex couples to adopt if they know they are exposing their children to ridicule by mainstream society? Please post your answer here.