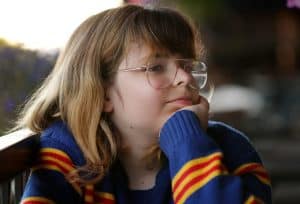 Santi Ceballos, 13, from Tucson, Arizona came out as non-binary in September 2017.  Many of his former classmates called him “it” because he doesn’t identify as being male or female and is possibly transgender.  Santi uses the pronouns they and them in regards to they’s sexual identities.
In the fall of 6th grade, Santi attended Camp Born This Way for transgender, gender creative and gender non-conforming kids living in Arizona.  Santi knits and is fond of Ru Paul’s Drag Race.
However, he was not fond of being bullied at his former middle school so he transferred to another one, slightly more progressive, Paulo Freire Freedom School,  According to GLSSEN, which does climate surveys of LGBT+ school students in the United States, thirty-five percent of students who attend school in one of states with “no promo homo law” on books experienced higher levels of harassment or assault in schools.
In April, Republican Governor Ducey of Arizona signed legislation striking down the state’s “no promo homo” law (ARST5-716) that was passed in 1991.  The law was intended to prevent sex education courses from discussing sexuality that “promotes a homosexual lifestyle.”
As Santi was fed up with being singled out for one-on-one sex education since they didn’t qualify for the standard sex education classes that were divided between boys and girls.  Being pulled out of class and singled out for independent study was “horrible,” reported Santi, not to mention humiliating.
The “No promo homo” guidelines prevent LGBTQ+ students from having educational opportunities equal to those of their hetero peers, according to a complaint filed in the U.S. District Court of Arizona this past March.  The plaintiffs  claim those guidelines are unconstitutional under The Equal Protection Clause of the Fourteenth Amendment.
Lambda Legal, National Center for Lesbian Rights, Equality Arizona filed an appeal in response to a joint lawsuit challenging K-12 guidelines.  Santi is one of two Arizona students who signed on as lead plantiffs who claim the state’s “no promo homo” laws effectively segregated them from peers during sex education instruction with the same sex.  They want Arizona to include queer identities that they can relate to in the sex education classes.
Normally shy, Santi was so fed up with the anti-LGBTQ laws in his state, that he decided to be one of the plaintiffs who is suing the state schools’ Chief Kathy Hoffman and the State Board of Education for enforcing an Arizona law banning teachers from banning a “homosexual lifestyle” while teaching students about AIDS and HIV during sex education class.
What good is sex education if all students don’t learn about sexual practices, health and aren’t given practical knowledge?  According to recent Gay Times research, only 36% of today’s youth identify as “exclusively straight.”  “The times, they are a changin.’ “ Schools should reflect this change!