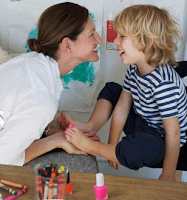 Molly Ringwald might have looked “Pretty in Pink,” but so does J. Crew’s president Jenna Lyons’s son Beckett. Or so his mother thinks. In an ad sent to J. Crew customers a few weeks ago, J. Crew President Jenna Lyons is having a fun time painting her five-year-old son Beckett’s nails. It’s a lighthearted portrait of a busy J. Crew President spending “quality time” with her prepubescent  son on a weekend. The ad’s caption reads: “Lucky for me I ended up with a boy whose favorite color is pink. Toenail painting is way more fun In neon.” (To see the full ad and an ABC News piece about it, click here.)
The ad has created a backlash from social conservatives. Fox News’s Dr. Keith Ablow ran an opinion piece on the issue and Erin Brown of Media Research Center called the ad “blatant propaganda celebrating transgendered children. J. Crew does not mind exploiting Beckett behind the façade of liberal, transgendered politics.”

Complaints about the ad are countered by Mara Keisling of the National Center for TransgenderEquality: “This is not how the world works and not how children work, and not even how trans advocacy works.” Well-known psychiatrist Jack Drescher, M.D., who happens to be gay, confirms “most research on gender identity and sexual orientation concludes that neither is a choice. Nor can they be shaped by a parent’s wishes.”

What is all the fuss about? In today’s world, don’t hetero men wear pink ties? What sibling hasn’t had their nails painted by their brother or sister, played house with them or like my mother-in-law, when she was small, had her hair set by one of her four brothers?

During the early 60’s, a man was considered “queer” if he wore an earring in one particular ear. Nowadays, heterosexuals are wearing piercings in both ears like rock stars or all over their bodies. Goth dudes wear nail polish. It used to be that only sailors had tattoes, now it’s a common denominator for the young, rich and poor alike. The world is adorning their bodies regardless of sexual orientation.
For a child as young and innocent as Beckett, nail polish is not a political statement nor a rebellion against gender behavior. For a moment, it may be a connection to his mom. It won’t change his sexual identity, but it will have the power to evoke another fond memory of his time spent with her.
What do you think? Is painting a boy’s toes with pink polish deserving of all the controversy?